Highest Honor: Eusébio to be memorialized at the National Pantheon – Portugal 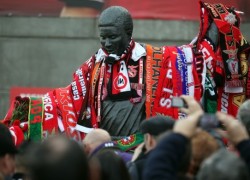 The Portuguese Parliament has approved Wednesday a motion to transfer the body of Eusébio to the National Pantheon, bestowing him with the honor to rest alongside most distinguished Portugal’s national heroes. Renaming Benfica’s Estádio da Luz in his honor is also being considered.

Eusébio, 71, one of the greatest soccer players of all time, died Sunday, at home in Lisbon of heart failure.  With thousands following his funeral procession, he was laid to rest in Lisbon, Monday.

António (Tony) Frias, a fan of Benfica, has donated $50,000 dollars to cover the costs of Eusébio’s burial at the National Pantheon. Frias, the President and CEO of S&F Concrete Contractors, based in Hudson, MA, is a Portuguese immigrant born in Santa Maria island, Azores.

Frias was instrumental in bringing Eusébio to the United States to play in the North American Soccer League and in placing Eusébio’s statue at the Gillette Stadium, in Foxborough, MA. The  statue, donated by Azorean immigrant and Boston businessman, Victor Baptista, is a replica of the famous Eusébio’s bronze statue, also donated by Victor Baptista, on display outside Benfica’s Estádio da Luz, in Lisbon, since the early 1990s.

In 1975, Eusébio had moved to North America, where played for the Boston Minutemen, the Toronto Metros, the Las Vegas Quicksilver and the Buffalo Stallions. He finished his career at New Jersey Americans in the American Soccer League.

Eusébio da Silva Ferreira, known to his fans as the “Pantera Negra” [Black Panther], was born in the Mafalala neighborhood of Maputo, Mozambique, when the country was still a Portuguese colony. He left home in 1961, aged 18, to join Benfica in Lisbon, Portugal.

Considered one of the 10 best world players of all time, during his professional career Eusébio scored 733 goals in 745 matches, playing for Portugal’s Benfica and internationally for the Portuguese national team. With Benfica, he won 11 Portuguese league titles and 5 Portuguese Cups. A bronze statue of him stands outside Benfica’s Estádio da Luz, in Lisbon,

He was awarded the Ballon d’Or in 1965 as Europe’s player of the year and twice won the Golden Boot in 1968 and 1973.  While one of his earliest great accomplishments was winning the European Cup for Portugal in 1962, he led Portugal to a third-place finish at the 1966 World Cup. In 1968 and 1973 he was named the top scorer in Europe, scoring 679 goals in 678 official games. In 1998, FIFA named him its International Football Hall of Fame.