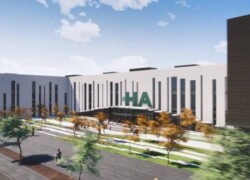 The Hospital Internacional dos Açores (HIA), the first private health facility of the Autonomous Region of the Azores, will be dedicated on March 8, to serve local and international patients,

The new private hospital is equipped to cover all local health needs, without the necessity for patients, in need of specialized care, having to travel outside the Region.

The HIA is located in Tecnoparque, municipality of Lagoa, São Miguel, where it will offer a broad range of services and specialties, provided by a team of over 350 qualified professionals.

The project was launched on July 19, 2018, comprising of a structure divided by 3 floors over an area of about 12.500 sqm, with a total an investment of 40 million euros.

To guarantee accessibility to the broad community, the new private hospital has established protocols with the main national and regional health insurers.

In addition, the Region has a network of clinics and health centers covering the primary health needs of the region population, estimated at 250 thousand, spread over nine islands.

The project was led the HPA Group, one of the Portugal’s largest private groups of the health sector, in partnership with Tecnovia Açores.