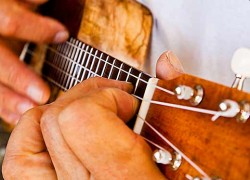 Lawmakers in the state of Hawaii are considering a bill that would make the ukulele the state’s official musical instrument.

The ukulele was originally brought to Hawaii by Portuguese immigrants where it became an integral part of the Hawaiian culture.

The bill which has passed through a House Committee Wednesday with a unanimous vote will be presented to the House floor for consideration.

The ukulele was introduced in Hawaii about 1879, by a group of Portuguese immigrants from Madeira.  João Fernandes, a native of Madeira, is credit with having played the “braguinha” – the original name in Portuguese — in Hawaii for the first time. The Hawaiians renamed the “braguinha” as “ukulele” in reference to “jumping flea” as suggested by the jumping motion of the hands playing the instrument.

The ukulele was introduced in the mainland United States around 1915, after being featured at the Panama Pacific International Exposition in San Francisco. Later the ukulele gained acclaim in Japan and the United Kingdom and from there around the world.

It became a symbol of the jazz age and musicians such a Elvis Presley, George Harrison, Elvis Costelo, Bruce Springsteen and Tiny Tim were fond of the famous easy to play Portuguese string instrument in Hawaii.  Ukulele festivals are popular all over the United States and Canada as well as in many other parts of the world. February 2nd is the International Ukulele Day.

With artists like Jake Shimabukuro, Herb Ota, Roy Sakuma, and many others, the instrument is now being played worldwide.

There are 16 adopted or designated symbols of Hawaii including the state motto, “Ua mau ke ea o ka aina i ka pono” and the state bird, the Nene Goose.