Heritage: Sculpture will honor the cultures of Portugal and First Nations – Canada 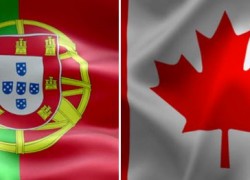 Lisbon will be home to a new public artwork that celebrates Canada’s Indigenous heritage. Earlier this year, the Embassy of Canada announced that West Coast artist Ts’uts’umult Luke Marston will produce a sculpture that links the cultures of Portugal and the Coast Salish First Nations.

The sculpture of a cod lure will sit on a base made of Portuguese calçada or cobblestone pavement. There is no word yet on the exact location for the work.

The Embassy views the collaboration as an opportunity to raise awareness about Portugal-Canada’s bilateral relationship as well as the heritage of Canada’s indigenous peoples, according to a recent article in Eyes Abroad (published by Global Affairs Canada). The announcement is part of a number of events marking the 150th anniversary of Canada’s Confederation.

Marston is a great-great-grandson of “Portuguese Joe” Silvey, and Kwatleemaat of the Sechelt First Nation. A whaler and fisherman, Silvey was born on Pico Island, Azores, and had arrived at Vancouver’s Gastown area by the late 1850s. Silvey also tried his hand at running a tavern during the fishing off-season. Residing for a time at Papiyek (Brockton Point) at what is now known as Stanley Park, the family eventually settled at Reid Island where Silvey died in 1902.

The new sculpture is inspired by an earlier work by Marston called Shore to Shore (2015). This monument is located at the site of his family’s ancestral village at Stanley Park and features life-sized portraits of Silvey, Kwatleemaat, and Khaltinaht, Silvey’s first wife, who died of illness. The 14-foot artwork is topped with a head of a raptor, representing both the Canadian eagle and the Portuguese açor and it sits on a base made of patterned black and white calçada.

Marston was born on Vancouver Island to carvers Jane and David Marston. He worked with renowned Coast Salish artist Simon Charlie and at the Royal British Columbia Museum’s Thunderbird Park. He has completed commissions for the Lieutenant-Governor of British Columbia and for the Truth and Reconciliation Commission of Canada, among other projects. His artwork has been exhibited in North America and Asia.