Heritage: Museum of the Portuguese Language went up in flames – Brazil 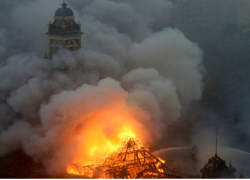 Flames ripped up through the third floor of the Museum of the Portuguese Language (Museu da Língua Portuguesa), in São Paulo, Brazil, on Monday, December 21.

After three hours, the blaze was brought under control by over 100 firefighters and more than 60 fire engines. One firefighter died of injuries while battling the flames. The cause of the fire is unknown. The museum was closed to the public at the time of the fire.

Established in 2006, the Portuguese language museum is the only museum in the world dedicated to a single language and one of the most visited landmarks in South America. The building, located at Estação da Luz, was constructed in 1901, in the style of a British railway station.

For the most part, the museum didn’t house actual ancient artifacts, but rather featured interactive multimedia exhibits tracing the history and evolution of the Portuguese language from colonial times to the present day.

It included an interactive 33-meter timeline highlighting the changes that Portuguese language underwent as it came into contact with other languages in the context of the Brazilian colonial experience. The museum also exhibited temporary collections dedicated to particular authors and movements from the Lusophone literary tradition.

According to curator Isa Ferraz, because most of the archives and content were preserved in digital back-ups, the cultural loss is minimal. “The museum became an international reference. It was revolutionary not only for its use of technology and format, but also for the way it engaged with the Portuguese language,” she told Brazilian television O Globo.