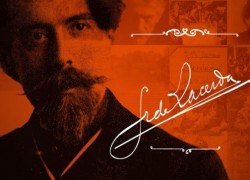 Composer and conductor Francisco Lacerda was born in May 11, 1869, in Ribeira Seca, São Jorge, Azores. At the age of four he studied music with his father.

In 1888, he moved to Porto, mainland Portugal, to study medicine but decided to drop out from medical school to study piano. Soon after, he moved to Lisbon where in 1891 he concluded the General Piano Course at National Conservatory where he also taught.

In 1895, Lacerda moved to Paris where he studied at the Paris Conservatoire and later at the Schola Cantorum, with Vincent d’Indy, and also studied with Felix Alexander Guilmant. In 1904, he became director of the concert season at the Casino de la Baule.

In Paris, he was in contact with relevant personalities of the European musical scene of his time, namely Erik Satie, Romain Rolland, Manuel de Falla, Isaac Albéniz, among others. His music was influenced by the works of French composers César Franck, Vincent d’Indy, Gabriel Fauré, Maurice Ravel, Francis Poulenc and Paul Dukas,

In France, Lacerda directs the Nantes Association of Historical Concerts, which he had founded, the Kursaal concerts, at the Montreux thermal resort, and the Great Classic Concerts of Marseille.

From 1913 to 1921, he returned to the Azores to compose and further study Azorean traditional music. In 1921, Lacerda moved to Lisbon, where he promoted chamber music recitals involving poetry readings and other cultural activities.

In Lisbon, he founded in 1923 the Pró-arte Group and co-founded the Lisbon Philharmonic Orchestra. Back in France, from 1925 to 1928, Lacerda kept an intense activity as composer and a conductor.