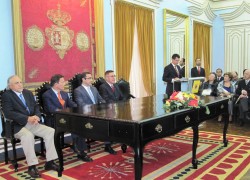 The non-profit group is hoping to restore the only remaining synagogue in the Azores.  The delegation met Monday with José Manuel Bolieiro, Ponta Delgada’s acting Mayor.

The Ponta Delgada synagogue is the oldest known on the islands and the oldest of Portugal’s remaining synagogues. It was built around 1820, and consecrated by Abraão Bensaúde, in 1836. He was the head the Jewish community in the Azores, a group of Jewish entrepreneurs and their families who settled on the island in early 19th century.

According to author Fátima Sequeira Dias, professor of Economic History at the University of the Azores, beginning in 1818, a group of Jewish immigrants came to the Azores, after the Bensaúde family moved from Morocco to the islands. They traded with England and transported emigrants to Brazil. In the process, they made a fortune while changing the economy of the Azores and the Azorean way of life.

The last religious service took place in 1966, with a group of Jewish soldiers stationed at the US Military Base on Lajes, Terceira island, celebrating Yom Kippur. At one point, the island of São Miguel was home to five synagogues. There are five Jewish cemeteries on the islands; two on São Miguel island, one on Terceira, one on Faial and one on Graciosa island.

The city of Ponta Delgada named historian José de Almeida Mello, from the University of the Azores and a member of Ponta Delgada’s City Council, to coordinate the synagogue restoration project.

According to an agreement signed in 2009, the project includes restoring the sanctuary and developing an on-site library and lecture hall. Azorean architect, Igor França, will be in charge of the restoration project details.

Scholars from the Center for Jewish Studies at Harvard University will identify, research and catalogue the many documents and artifacts found in the Sabar Hassamain Synagogue, some of them dating back to the 15th century.

The Azorean-Jewish Heritage Foundation was formed in Massachusetts, earlier this year. The Foundation hopes to recruit people in the Azores and the United States to help support the project.

In a statement in Ponta Delgada, for the Portuguese American Journal, Sen. Michael Rodrigues, the head of the Massachusetts delegation, expressed his enthusiasm for the project. He said, “It is an honor and a pleasure to work with the municipality of Ponta Delgada to restore this historically significant Synagogue. I look forward to working with both the Azorean and Jewish communities to help this dream become a reality.” A delegation from Massachusetts, which included state Sen. Michael Rodrigues, had visited the Azores last year.

The Azorean Jewish Heritage Foundation is presided by Gideon Gradman with Donald Berube as treasurer and Lisa Rosen secretary. The board of directors include Paula Raposo, Fernando Garcia, Michael J. Rodrigues, Robert Waxler and Pedro Amaral.

(*) Carolina Matos is on assignment reporting from the Azores. She is the founder and editor of Portuguese American Journal online. She was the Editor–in-Chief for The Portuguese American Journal, in print, from 1985 to 1995. From 1995 to 2010, she was a consultant for Lisbon based Luso-American Development Foundation (FLAD). She graduated with a Bachelor’s Degree in Liberal Arts and a Master’s Degree in English and Education from Brown University and holds a Doctorate in Education from Lesley University. She is also an adjunct professor at Lesley University where she has taught undergraduate and graduate courses. In 2004, Carolina Matos was honored with the Comenda da Ordem do Infante D. Henrique presented by Jorge Sampaio, President of Portugal.