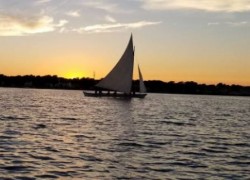 The Azorean Maritime Heritage Society (AMHS) his hosting the 9th International Azorean Whaleboat Regatta to be held in New Bedford (MA) on September 6-10.

A team of 29 local men and women will represent the United States of America in a rowing and sailing competition against teams from the Azorean islands of Faial and Pico.

The goal is to promote Azorean culture and whaling heritage by raising awareness and pride within New England’s Azorean-American community and recognizing the rich maritime heritage commonly shared for more than 150 years between New Bedford and the Azores.

Complementing the event, a Photographic Retrospective, by photographers Gemina Garland-Lewis and O. Luis Mazzatenta, opens on September 6 at 6pm, at the New Bedford Whaling Museum. The exhibit explores the people and cultural history of Azorean whaling.

On September 7, at 6pm-8pm, a lecture will be presented by international boat builder Lance Lee titled ‘Bela Vista & the Resurgence of the Azorean Whaleboat.’  Lance Lee. Who oversaw the construction of Bela Vista, the first Azorean whaleboat built in the post-whaling era, tells the story of the Bela Vista and the resurgence of this unique class of boat during this lecture, presented during International Azorean Whaleboat Regatta week in New Bedford. Reception at 6pm followed by the lecture at 7 pm. Free and open to the public. Advance registration recommended.

The calendar of events includes a week of cultural presentations, lectures and receptions, including the Regatta Awards Ceremony & Closing Banquet scheduled for September 10. Funds raised from these events will support the International Azorean Whaleboat Regatta.

Find more information about the regatta and the Azorean Maritime Heritage Society here.