The Azores are commemorating the 60th anniversary of the eruption of Capelinhos Volcano, on Faial island. The volcanic event, which lasted 13 months, began on September 27, 1957 and ended on 24 October of the following year.  The celebrations begin September 27 through October 24 of next year. 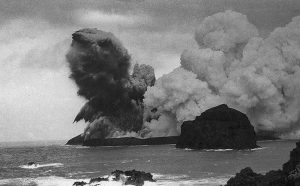 The eruption burst in the sea, about a kilometer off the coast of Capelo and Praia do Norte parishes, spawning 450 seismic events, gushing fire, lava, ashes and steam.

Hundreds of houses and land were buried, lost forever, in the many surrounding villages and neighborhoods causing the evacuation of 1,712 people and affecting the lives of many more thousands. It is estimated that about 40% of the island population was displaced, many of them forced to emigrated to the United States. 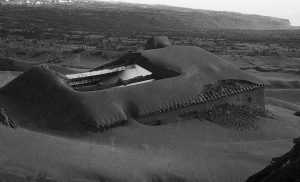 When the eruption stopped in October 1958, Faial had gained 2.4 kilometers of land. Currently, due to erosion, about a fifth of the gained land is left.

The program for the celebrations includes exhibitions, book launches, commemorative stamps, contests alluding to the eruption, and the exhibition of the documentary “Capelinhos 60 years after”.

Most of the highlights of the celebrations will take place on Faial (population 15,000), at the Capelinhos Volcano Interpretation Center, one the most visited sites in the Azores.

In 2016, the Interpretation Center received about 35,500 visitors. It is estimated that more than 230 thousand have stop at the site in the last decade.

Inaugurated in August 2008, the Interpretation Center is a singular architectural project created by local architect Nuno Lopes. Built in reinforce concrete, the structure was purposely partially sunken, buried by the ashes, not to be seen on the surface.

The Capelinhos Volcano Interpretation Center houses an informative, didactic and scientific facility, providing exhibitions with special emphasis the volcanic formation of the Azores archipelago leading to the Capelinhos Volcano eruption in the context the world volcanic activity. In addition there is a permanent exhibit the history of Azorean lighthouses   and displays of samples of rocks and various minerals.