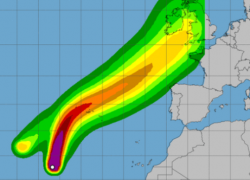 Tropical storm Helene is moving northwestward over the eastern Atlantic at speeds near 21 miles per hour where it is expected to make a landfall on the Azores islands late Saturday or Sunday, the National Hurricane Center (NHC) has forecast.

The NHC has said that maximum sustained winds are near 65 miles per hour, with higher gusts. Little change in strength is expected during the next hours.

According to the NHC, Helene could bring 2 inches to 4 inches of rain to the Azores and isolated amounts up to 8 inches, as well as life-threatening flash floods. Swells generated by the storm could produce life-threatening surf and rip current conditions. 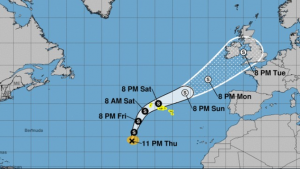 The Portuguese Institute of the Sea and the Atmosphere (IPMA) said on Thursday, tropical storm Helene has an estimated 40-70% probability of crossing the zone between the western (Flores and Corvo islands) and central groups of the Azores (Faial, Pico, São Jorge, Terceira and Graciosa). It is unlikely (20-40% probability) that the center of the storm will pass through the eastern group (São Miguel and Santa Maria islands).

Tropical storm Helene developed as a category 2 hurricane, with sustained winds are near 110 miles per hour, located about 670 miles west of the southernmost Cabo Verde Islands and about 1550 miles south-southwest of the Azores. The storm gradually weakened on Tuesday night, becoming a tropical storm by Thursday.

The Atlantic is currently very active, with several other cyclones and disturbances ongoing. Tropical storm-force winds extend outward from the eye of the storm up to 160 miles, forecasters said.