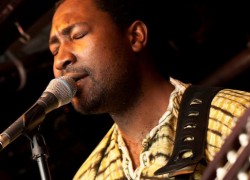 Mozambique native songwriter Herder Tsinini is the winner of the 6th Peacedriven Songwriting Award sponsored by the Peacedriven Campain in partnership with Sonicbids.com.

Helder Tsinini won the award with his song “Va Gumulelana” topping more than 300 entries to claim the annual music prize. selected by a panel of judges comprised of social activists and musicians.

The composition – written in the Mozambican language Ronga and translated to mean “stop the war, grow in peace” – is performed by his band Kina Zoré and is the first non-English language song to win the Peacedriven Songwriting Award.

Tsinine, who now resides in Boston, Massachusetts, grew up in the Mozambican capital of Maputo to a musical family and was raised during that country’s intense civil war lasting from 1977 to 1992. He now leads the Afro-pop band Kina Zoré and according to the band’s website, Tsinine’s life in Mozambique inspired his strong sense of social justice.

His song “Va Gumulelana,” produced by Dillon Zahner, is just one of many he’s written to raise awareness about causes including war crimes prevention and AIDS prevention.

As the winner of the Peacedriven Songwriting Award, Tsinine receives a monetary award and his winning song can be heard on the Campaign’s website.

The Peacedriven Campaign received song submissions from around the world, including Australia, Canada, France, Jamaica, Israel, the United Kingdom and the United States, via the online music network Sonicbids.com.