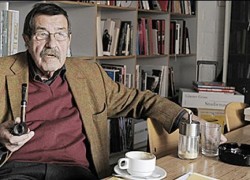 The renowned German writer, artist and activist Günter Grass, who has died at the age of 87, had a long and warm association with the Algarve.

His passing on Monday in the northern German city of Lübeck brought to an end an extraordinarily creative career steeped in both accolades and acrimony.

In contrast to his formidable presence in Germany, Grass was always a low-key figure in the Algarve, a place he appreciated as a peaceful working retreat.

He first came to international prominence in 1953 with his audaciously inventive novel The Tin Drum. Thirty years later and having published many more books, short stories, plays and poems, he became an Algarve holiday homeowner.

On befriending fellow-Germans Marie and Volker Huber, founders in 1981 of the Centro Cultural São Lourenço near Almancil, Grass held exhibitions there for decades.

Marie Huber recalled this week that during well-planned visits with his large family two or three times a year, Grass always busied himself writing, sketching and painting.

An exhibition of his sketches, watercolors, prints and sculptures was showing at the São Lourenço cultural center in 1999 when it was announced by the Swedish Academy that Grass had been awarded the Nobel Prize for Literature.

He celebrated his 75th birthday in the Algarve in 2002 with a retrospective, his tenth one-man show at São Lourenço. It opened with a reading by Grass from his latest novella, Im Krebsgang (Crabwalk). The Palácio de Galaría in Tavira was the venue for a major exhibition the following year.

By then Grass had moved from his original holiday home in Estômbar, near Lagoa, to a self-designed haven surrounded by nature in the foothills of Monchique.

Grass was “a very gentle man,” Marie Huber recalls. Others in the Algarve have commented on his quiet friendliness, his love of storytelling and his sense of humor.

In Germany and elsewhere he was a much more confrontational and often stridently outspoken character.

At a Council of Europe meeting the year after his Nobel Prize, he denounced the bigotry shown towards the Roma people, Europe’s largest ethnic minority for whom he set up a foundation.

Without compromise he campaigned for global disarmament, but admitted he had been too hasty in warning that German reunification might once again threaten world peace.

Accusations of hypocrisy accompanied the row that erupted in 2006 when he revealed in his memoir Peeling the Onion that as a teenager he had served as a tank gunner in the Nazi Waffen SS.

In 2012, at the age of 84, he was declared persona non grata in Israel following publication of a prose poem called What Must Be Said in which he criticized Israel as being a threat to world peace because of its nuclear capability and hostility towards Iran.

A few weeks later in a poem entitled Europe’s Disgrace, he chastised his own country’s treatment of debt-ridden Greece, which he called “a country sentenced to poverty.”

That same year, the São Lourenço cultural center sadly closed and, because of heart problems and advancing age, the otherwise indomitable Grass was never able to visit his cherished Algarve again.

The writing did not end there, however, for he was working on a new book during his last days. He died, of a lung infection, surrounded by his family. 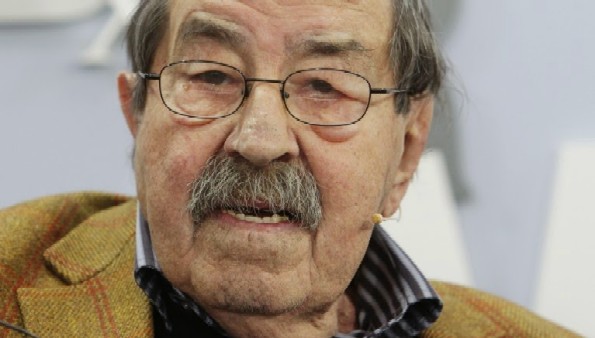