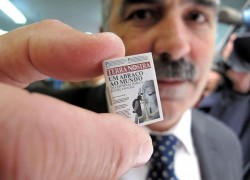 A special edition of the Portuguese language weekly “Terra Nostra,” measuring just one inch by 0.7 inches, has been certified by the Guinness World of Records as the world’s smallest newspaper.

Printed by Nova Gráfica printing house, the revenues will benefit the local branch of the Associação Portuguesa de Deficientes an organization dedicated to the disabled. 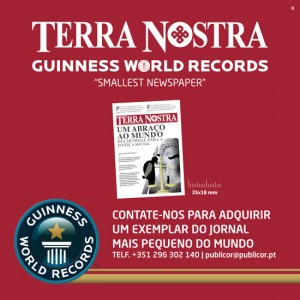 “It is officially the world’s smallest newspaper,” said Anna Orford, a member of the Guinness World Records, remarking that, indeed, it was a “perfect replica of the newspaper.”

With the headline “A hug to the world,” the special 32 page edition of Terra Nostra costs 2.5 euro and can be read using a small magnifying glass to increase the text from six to eight times.

The paper, edited by Natacha Pastor and published by the Publiçor Grupo, is available at publicor@publicor.pt and at Casa(s) dos Açores worldwide.