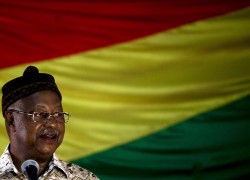 The capital of Guinea-Bissau awoke Friday to apparent calm after a night of gunfire and troop movements during which prime minister and presidential candidate Carlos Gomes Júnior’s home was attacked by unknown assailants.

Gomes Jr.’s whereabouts, as that of interim President Raimundo Pereira, were not immediately known.

Neither political nor military leaders spoke publicly about the hours of violence Thursday night, also involving the firing of heavy weapons, which the West African regional bloc ECOWAS condemned as an apparent “coup”.

Bissau’s only hospital said it had received no dead or injured.

Radio stations and the sole television station fell silent during the fighting, which tapered off after a couple of hours with troops taking positions in main streets, including the areas where Gomes Jr. and Pereira live and around foreign embassies.

The crisis in the chronically troubled country, increasingly used by Latin American cocaine traffickers as a trans-shipment hub, erupted on the eve of the start of campaigning for a controversial presidential runoff election set for April 29.

Frontrunner Gomes Jr., head of the ruling PAIGC party who stepped down as prime minieter to campaign, was to have faced main opposition leader Kumba Iala in the face-off, although the latter had said he would boycott the vote, alleging “generalized fraud” in the first round last month.

Guinea-Bissau‘s former colonial power, Portugal issued a “vehement” appeal for the cessation of violence, acknowledging the “uncertain” character of the events.

Brazil, like Portugal a major aid partner, urged the UN Security Council to call an emergency meeting on the crisis.

The election as called after the death of President Malam Bacai Sanhá last January in a Paris hospital after a long illness.

A Lusa correspondent joined a crowd of curious people in entering the vandalized, empty and unguarded home of Gomes Jr., which bore signs of violence, including shattered windows and a toppled wall.

Some in the crowd shouted “dogs” and “thiefs” at when an army truck drove past.