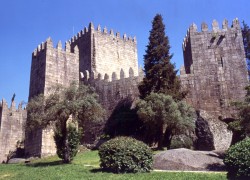 Over the course of the year, the ancient Portuguese city of Guimarães will be the official site of the 2012 European Capital of Culture.

Focusing on four themes – City, Community, Thought and Arts — the year round celebrations will begin on January 21 with the launching of a diverse and extensive cultural program which includes music, cinema, photography, fine arts, architecture, literature, thought, theatre, dance, and street art.

Located in the northern region of Minho, Guimarães, with its distinctive 10th-century castle, is classified a UNESCO World Heritage Site. The city also prides itself on its impressive architecture including many traditional buildings from the 15th to 19th century.

Alongside with its glorious past, modern Guimarães boasts a significant textile industry and is home of the University of Minho an important research and technological center of knowledge and innovation for the city and the region.

According to João Serra,the president of the Guimarães Foundation which is in charge of the Cultural Capital activities, up to 1.5 million tourists are expected to visit the city in 2012. The budget for the celebrations is estimated at 25 million-euro ($33 USD million)

The European Capital of Culture initiative, funded by the European Union Culture Programme, is a 25 year old program which promotes Europe’s cultural diversity. The initiative aims to highlight the richness, diversity and shared characteristics of European culture and promote understanding among citizens. The title has a long-term impact, not only on culture but also in social and economic terms, both for the city and for the surrounding region. Guimarães shares the 2012 title with the city of Maribor in Slovenia, located in the opposite end of Europe.

Following Guimarães and Maribor in 2012, the future European Capitals of Culture will be Marseille (France) and Košice (Slovakia) in 2013; Umeå (Sweden) and Riga (Latvia) in 2014; and Mons (Belgium) and Plzeň (Czech Republic) in 2015.