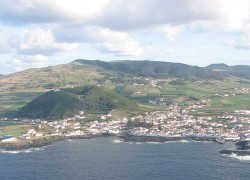 Recurrent seismic activity on Graciosa island was considered to be above normal according to the Center of Volcanology and Geological Risk Assessment (CVARG)at the University of the Azores.

Three seismic events, magnitudes II and III on the modified Mercalli scale, were felt during the week in the southwestern areas of Almas, Guadalupe, Ribeirinha and Pedras Brancas on the island. A fourth seismic event, maganitude III on the modified Mercalli scale, was also registered Saturday, March 10, at southwest of Vitória.

The most recent serious seismic crisis occurred July 9, 1998, on the islands of Faial, Pico and São Jorge when an earthquake, measuring 5.8 on the Richter scale, destroyed hundreds of dwellings and killed nine people.

On January 1, 1980, an earthquake of tectonic origin, measuring 7 on the Richter scale, rocked the islands of Terceira, Graciosa and São Jorge. This major earthquake killed more than 60 people and destroyed hundreds of residences, leaving thousands of people homeless on all three islands.