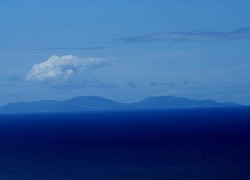 Small landslides observed Wednesday near the shoreline of Serra Branca were associated with the seismic crisis taking place on Graciosa island, in the Azores, since March 3.

The landslides were caused by an earthquake of magnitude 2.7, on the Richter scale, felt Tuesday night, in the Guadalupe area of the island, after several aftershocks were registered.

According to João Luís Gaspar, from the Center for Volcanology and Geological Risk Assessment (CVARG) at the University of the Azores, the place where the landslides occurred is removed from populated areas.

Recurrent seismic activity, considered to be above normal according to the CVARG, is being felt on Graciosa island lately.

Three seismic events, magnitudes II and III on the modified Mercalli scale, were registered last week in the southwestern areas of Almas, Guadalupe, Ribeirinha and Pedras Brancas on the island. A fourth seismic event, maganitude III on the modified Mercalli scale, was also registered Saturday, March 10, at southwest of Vitória.