Got Plastic? Marine pollution and the perils of microplastic – By Len Port 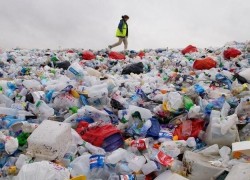 While there is no doubt about the vast scale of the plastic pollution problem, it is far from clear how places like the Algarve, mainland Portugal, are going to cope with the crisis.

Marine plastic pollution, particularly microplastic material, is a serious but as yet not fully understood threat to nature and to human health. If it worsens, it will increasingly threaten the economic well-being of communities across the world such as ours that depend on tourism and fisheries.

The local and regional threat shouldn’t be taken out of context because it is a global problem, but many people here seem to be oblivious to the fact that our reputation for beautiful beaches and excellent seafood are at stake.

The lack of awareness may be due in part to the fact that much marine plastic pollution cannot be seen as it exists in micro form.

The neighbouring Mediterranean with its renowned holiday resorts is one of the most polluted seas in the world.

A new report by the World Wildlife Fund (WWF) says plastic currently represents 95 per cent of the waste floating in the Mediterranean.

The record levels of pollution from microplastics are threatening marine species and human health, according to the WWF.

It says the concentration of microplastics is four times higher in the Mediterranean than the highest concentration in the Pacific Ocean.

Much of the plastic in the Mediterranean remains trapped there forever, though plenty must seep through the Straits of Gibraltar and along the southern coast of Portugal to add to the pollution along the Atlantic shores.

Much of the plastic pollution in the sea and on the beaches of the Mediterranean starts out as waste material dumped in landfill sites in Turkey Spain, Italy, Egypt, France and North Africa.

The tourism and fisheries economic sectors are increasingly being affected while themselves contributing to the pollution.

European fisheries are facing about €62 million of damage caused by falling fish catches and damage to boats.

More than eight billion metric tons of plastic has been produced since plastic was introduced in the 1950s. The amount of plastic produced in a year is roughly the same as the entire weight of humanity. [Virtually every piece of plastic ever made still exists in some shape or form.

Only a small percentage of plastic waste is recycled. It is either dumped in landfills , incinerated or simply not collected .Since most plastic doesn’t biodegrade in any meaningful sense, all that plastic waste could exist for hundreds of years.

Wherever you look, the statistics on the source of plastic pollution are horrific.

One million plastic bottles are bought every minute around the world — and that number is expected to top half a trillion by 2021. Less than half of those bottles end up getting recycled.

About 580 billion cigarette butts are discarded annually in the European Union. Each butt takes about 10 years to disintegrate.

The WWF argues for stringent action including the introduction of an international treaty with binding reduction measures and agreements about trade in plastic waste and criteria for recycling.

The national measures should include a 100% recycling target plus a ban on plastic bags and single-use plastics.

Legislation should also be passed to ban microplastics in personal care products.

The problem all along the European shores has already been compounded over many years. At long last the European Commission has introduced the New Waste Package which came into law on 4th July 2018 for all 28 EU member countries.

This contains substantially increased targets for collection and recycling of plastics which currently are polluting the world’s oceans.

On 28 May this year the EU Council and Parliament introduced the SUP (Single Use Plastics) Document which proposes that each member state conducts awareness-raising educational campaigns about the disposal of all waste products such as plastic cups, straws and picnic utensils.

In September the debate will begin and due to public pressure on plastic litter it is expected to become legislation during first half of next year.

In other words, a comprehensive EU effort is under way, although the exact timing is still unknown.

Most experts reckon that overcoming the global plastics crisis will need an international commitment on the scale of the Paris agreement on climate change.

Meanwhile, the best we can each do as individuals is to cut down on our own use of plastic and help clean up the waste of others.