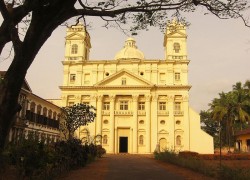 Members of  the group All Goa Freedom Fighters Association (AGFFA) have demanded the closing down of  Fundação Oriente and Institute Camões,  two prominent Portuguese cultural institutions represented in the Indian territory.

On a statement to the local press, AGFFA representatives alleged that both institutions are  “frontline organizations”  mandated  by Portugal “to create awareness about Portuguese culture” and that they should be “thrown out of Goa.”

“The problem with Portuguese officials is that they still think they own Goa,” said AGFFT member Nagesh Karmali to the press.

The incident took place on April 25th, at the time Portuguese ambassador to India, Jorge Rosa de Oliveira, was  in Goa attending the 37th anniversary of the  “April 25 Revolution” which took place in Portugal in 1974.

According to the Indian press,  AGFFT  sent a verbal notice to the Government of India demanding to close down the two major Portuguese institutions in Goa.

Goa to host the Lusophony Games in 2013

Football, volleyball, table tennis, beach volleyball and athletics are some of the sports modalities included in the 2013 games.  Countries expected to participating include Angola, Brazil, Cape Verde, East Timor, Guinea-Bissau, Macau (China), Mozambique, Portugal, and São Tome and Principe. India and Sri Lanka are associate members of the Games.

Goa first bid for the Lusofony Games in 2006.  Alex Vong is the current president of the Association of the Portuguese-Speaking Olympic Committees organizing the event.