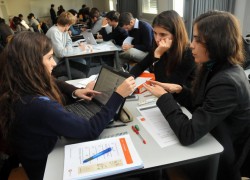 Portugal ranked 19th among 34 countries in terms of the number of women holding senior management positions, according to a study by consultancy firm Mercer released Monday ahead of March 8, International Woman’s Day.

The study of 247 Portuguese companies found that women held 27% of more than 6,200 top posts, slightly below the European average of 29%.

The Mercer report was based only on medium and large private sector businesses, which employ a minimum of 1,000 people.

In Europe, Mercer analyzed data on 264,000 senior management and executives in 5,321 companies across 41 countries.

According to the data, the ratio of senior executives and managers that were female averages 29% in countries across Europe compared to 71% of men.

In Western Europe, the countries with the greatest proportion of women in the executive suite amongst the sample group were Greece and Ireland (33%) followed by Sweden (30%) and Belgium (29%). Spain, UK and France all had 28% female representation. Next came Denmark and Portugal (both 27%), Finland, Switzerland and Norway (all 25%) and Italy with 22% representation followed by Austria (21%), Germany (20%) and the Netherlands (19%).

Worldwide, the worst results came from countries in the Middle East. In Saudi Arabia, it found no senior women executives, and just seven per cent in Qatar. The United States were not included in the study.

Former soviet countries dominate rankings with most female executive representation. Lithuania was the winner where women account for nearly half of all the senior jobs with women making up 44 per cent, and men make up 56 per cent. Saudi Arabia came last without a single woman occupying a top slot, according to Mercer.

The International Woman’s Day is celebrated on 8 March worldwide. Mercer is a global leader in human resource consulting and related services.

More information about the Mercer report >>