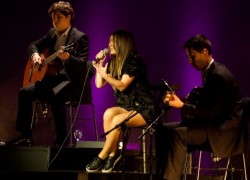 Her voice evokes fado as a music of the streets, where it began, infused with all the ardor, passion and honesty of an artist rewriting tradition in her own name.

Gisela’s second CD, Nua, extends her trailblazing approach to fado-Portugal’s most emblematic music-with a fresh and spirited rejoinder to knee-jerk traditionalism combined with a bold vision of fado’s future.

her first, self-titled CD (released in 2013), brought rapturous praise from the Portuguese and European press and within two weeks of release went straight to the top of the Portuguese charts. Her subsequent live appearances – one part ingénue, one part rebel – rattled contemporary sensibilities but also firmly established her as a unique and uncompromising voice.

Where other singers communicate the fado’s strong sentiments solely through their voices, Gisela’s fado is a full-body experience: onstage, she jumps, she gestures, she emotes. Offstage, her interviews are similarly wide-ranging and expansive. She moves swiftly from discussing fado to house music to Nick Cave and Nina Simone, asserting boldly that “all genres of music end up influencing all others because music thrives upon life itself.” 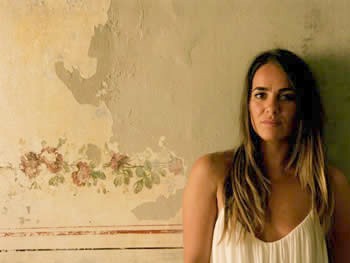 The arc of her meteoric rise has been anything but conventional. She was born in 1983, in the northern Portuguese city of Barcelos, rather than in Lisbon, the cradle of fado.

Her career began when she secured her first contract by sending a portfolio of videos to Portugal’s major labels, signing soon after with the Valentim de Carvalho label (the Blue Note Records of fado).

Both Gisela João and Nua were recorded not in sterile studios, but in Old World palaces located in and around Lisbon, the equipment trucked in and the interiors left untouched.

Her video catalog – its existence a genuine rarity for a fado artist – embraces a bold, even iconoclastic visual style, expressed perhaps most powerfully in the video for Labirinto ou não foi nada, featuring not Gisela João but a transvestite artist in scenes of backstage and subterranean intrigue.

With the release of Nua (Naked) she has plunged deeply into the most sacred territory of the fado canon – the repertory of the late Amália Rodrigues, undoubtedly the music’s foremost exponent. In so doing, she stands an excellent chance of helping to redefine contemporary notions of the fado.

Nua steadfastly refuses to resolve the paradox of tradition and innovation, offering strikingly pure yet emotionally supercharged music. With few exceptions, the selections sit firmly within the fado repertory. Some are refined, even inspired, such as “Um fado para esta noite” (A Fado for Tonight) and “Naquela noite em Janeiro” (That Night in January), associated respectively with the towering figures of Beatriz da Conceição and Argentina Santos. Others, such as the landmark “Labirinto ou não foi nada” (Labyrinth, or It Was Nothing), burst with wild musical invention, tightly controlled and masterfully directed. Perhaps the most controversial tracks are interpretations of two classics by the Brazilian singer Cartola, “O mundo é um moínho” (The World is a Windmill) and “As rosas não falam” (Roses Don’t Speak).

Together with her version of the Mexican folk standard “Llorona” (The Wailing Woman), what sets these tracks apart from mere covers is the complete dedication of the singer and her musicians to moving them within the fado’s sphere. The result brings Gisela João’s music full circle, expanding the scope of our conception of fado, without sacrificing or betraying its more than 200-year tradition.

Gisela João will be accompanied by Ricardo Parreira on the 12-string Portuguese guitar, Nelson Aleixo on the classical guitar, and Francisco Gaspar on the acoustic bass guitar. A pre-show talk on fado and a special exhibit from the Museu do Fado in Lisbon are included in the February 25th program.

The First NY Fado Festival is a celebration of the iconic Portuguese musical tradition that has ancient roots, but is ever moving forward. The NY Fado Festival is produced by Isabel Soffer/Live Sounds and is supported in part by the Consulates General of Portugal in New York and Newark, Fado Museum, TAP Portugal and EDP Renewables North America.