Geoffrey Wells: A Fado for the River – Book 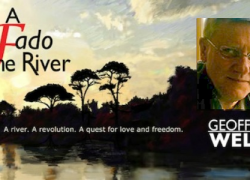 Geoffrey Wells was born in a mining town in South Africa.  His historically-based debut novel, A Fado for the River, is a thriller about love, liberation and self-determination.

The narrative captures the turmoil in Mozambique at the time of the 1974 Carnation Revolution in Lisbon, which marked the end of Portugal’s colonialism and the new beginning for the former Portuguese colony.

The novel draws from events within the author’s vivid memories and own experiences, growing up on a South African farm. After high school he was reluctantly drafted into the South African army doing basic training with a commando unit based at the edge of the Kalahari desert.

He was called up during the Angolan liberation war, to defend the border from insurgent communist rebels and reported to a psychotic captain who ordered him to serve as quartermaster and intelligence clerk; and in so doing he saw horrific photographs of war atrocities.

Later, he immigrated to Southern California where, in 1973, as a political science student, he shared the spirit of the civil rights movement and protested against South Africa’s apartheid.  It was a trip to Mozambique during this troubling time that served as the inspiration for A Fado for the River.

In 1973, ten months before Salazar’s totalitarian regime fell in Portugal and the beginning of the Carnation Revolution (the genesis for the story), Wells traveled to Mozambique and boarded a river tour that he would never forget. 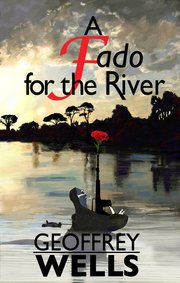 This event was the inspiration that influenced the detailed, culturally-rich backdrop for his debut novel.  The story tells of murder, suffering, betrayal, loyalty and unforgotten love involving an American television executive accused of a murder and then blackmailed by an old acquaintance in Lisbon.

The action brings him back to in 1974, the six days prior to the Carnation Revolution in Portugal, which profoundly impacted Mozambique.

The novel captures the nostalgia of saudade in the feelings of sadness and loss of the principal characters who grapple with the lyrical theme of fate and destiny.

After a career in film and software development, Wells joined Fox Television as Vice President of IT.  It was during this time with Fox Television that he wrote A Fado for the River, and produced a short, award-winning, animated film, The Shadow of Doubt, animated by his wife Cynthia Wells.  The film won 6 awards, and was shown in 26 film festivals.  He also wrote the lyrics to the jazz song in the film.  Wells is currently writing his next novel.

A Fado for the River, published on May 8, 2011, is available in ebook format, through Smashwords ,  iTunes, iBooks, BN.com, and Diesel for Kindle.