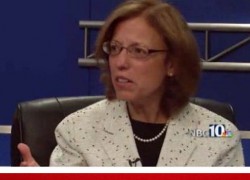 The measure would make Rhode Island the 10th state to allow gay marriage. Rhode Island is the only state in New England that has not legalized same-sex marriage.

Paiva Weed, a Democrat, has also indicated she does not support the Defense of Marriage Act, which would ask voters to decide whether the state constitution should define marriage as “a lawful union between one man and one woman.” She voted for civil unions on June 29, 2011.

In a recent interview for RI WJAR-TV’s “10 News Conference,” Paiva Weed said, “There’s a whole group of people who are genuinely struggling with this issue […] The debate and the discussion in the Senate will be very real, and neither I nor anybody else … really knows what the final outcome of that will be.”

M. Teresa Paiva Weed was re-elected in 2013, on a 37-1 vote, for a third term as RI Senate President. First elected to the Rhode Island Senate in 1992, she was first elected in January 2009 to serve as President of the Senate, the first woman in Rhode Island ‘s history to serve in this capacity. She had served as Chairwoman of the Judiciary Committee in 1997 and Senate Majority Leader in 2004.