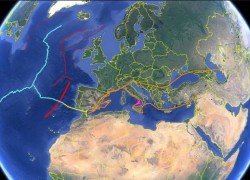 Experts in the Azores have alerted the population for recurrent seismic activity which they considered to be “above normal values.”

According to the Information Center for Seismic-Volcanic Surveillance of the Azores (CIVISA) multiple seismic events have been recorded on São Miguel and Terceira islands on January 4 and 5.

On Monday, CIVISA registered an earthquake of magnitude 4.1 on the Richter scale near Várzea, on São Miguel island. The quake was felt with intensity in Porto Judeu, Terceira island.

According to CIVISA, about 48 earthquakes of low magnitude occurred on Sunday in the Furnas volcano area with recurring tremors recorded on Monday. The seismic activity in the Furnas area had a magnitude range of 2.0 on the Richter scale. The epicenter was between four and five kilometers west of Furnas.