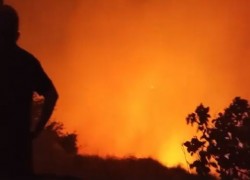 Starting on Monday, Madeira island has been hit by several fires causing three deaths in Funchal. One person was reported missing. Over one thousand were evacuated and dozens of homes destroyed.

The Mayor of Funchal, Paulo Cafofo, told local media that most of the evacuees were local people from the areas of Babosas and Curral dos Romeiros.

On Tuesday, a 24-year-old man, with criminal record as an arsonist, was arrested suspect of starting the fire in the mountains of São Roque near Funchal.

On Tuesday the flames had encroached Funchal (population 120,000), the capital city that attracts more than a million tourists per year. All those killed and injured by the fires were local residents.

Several domestic and international flights were cancelled. On Wednesday the government of Madeira said the fires were under control.

On mainland Portugal, where temperatures have peaked at over 44 degrees Celsius, forest fires first took hold on Friday. One person was killed by flames in the central Santarem region.

Across the land, 4,000 thousands of firefighters were struggling to control over 150 forest fires affecting the regions of Aveiro, Agueda, Arouca, Castelo de Paiva, Peneda-Geres (Arcos de Valdevez),Viseu, Leiria, Portalegre and Viana do Castelo, where hundreds were forced to leave their homes.

Police have said that various fires were lit by arsonists and that several suspects were arrested. The fires were further aggravated by bad forest management, they said.

The Portuguese Interior Ministry requested assistance from the European Union. Neighboring Spain sent two planes and Italy one aircraft to help with the fire-fighting efforts.

Madeira (population 289,000), an autonomous region of Portugal, is a two-island archipelago off the north-west African coast.