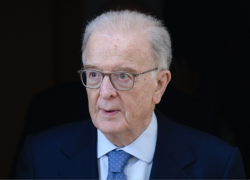 Former president of Portugal, Jorge Sampaio, has died today at the age of 81. One of the most prominent political figures of his generation, he helped to consolidate the first three decades of democracy, following the April 1974 Carnation Revolution. As a young lawyer, he stood up to Portugal’s long lasting Salazar’s dictatorship.

A heart patient, President Sampaio was admitted at Santa Cruz Hospital, in Lisbon, with “respiratory difficulties” on August 27. The cause of death was not disclosed.

“Jorge Sampaio was born and educated himself to become a fighter and his fight had a goal: freedom and equality,” current President Marcelo Rebelo de Sousa said in a televised address to the nation. “He proved that you can be born privileged and still dedicate your life to help the underprivileged.”

Rebelo de Sousa highlighted Sampaio’s fight for the end of Portugal’s dictatorship, which crumbled in 1974, for the independence of ex-colony East Timor and the rights of refugees.

Praising President Sampaio legacy, Prime Minister António Costa also remarked, “We bow down before the memory of a man who always fought for freedom, for democracy, and whose moral uprightness brought prestige to our country’s political life.”

On his honor, Portugal would observe three days of national mourning and Portuguese flags on public buildings will fly at half-staff.

President Jorge Sampaio began his journey, while still a student, as one of the protagonists, at the University of Lisbon, of the academic crisis of the early 1960s, which generated a long and widespread movement of student protest the Estado Novo, until 25 April 1974.

Up until his death, he had chaired the Global Platform for Syrian Students, which he himself founded in 2013 with the aim of responding to the academic emergency that the conflict in Syria had created, leaving thousands of students without access to education.

In 2019, Jorge Sampaio and Vartan Gregorian, former president of Brown University and president of Carnegie Corporation of New York, were awarded the organization’s highest honor, the McCall-Pierpaoli Humanitarian Award, for their steadfast leadership in the international community and for their work to ensure funding for displaced Syrian students and scholars through the Global Platform for Syrian Students and through Carnegie Corporation of New York’s support.

As the founder and chairman of the Global Platform for Syrian Students, Jorge Sampaio managed the impossible task of gathering an emergency consortium of governments, regional and international organizations, donor agencies, foundations, universities, faith-based organizations, and various ethnic and cultural NGOs, along with the private sector and individuals. Sampaio’s agenda was the rescue of as many students as possible, providing them with a home and the opportunity to be educated, so that they might serve as future resources for their societies.

He lived in the United States as a child when his father, a renowned Portuguese doctor, was a medical student at Johns Hopkins University in Baltimore.

Sampaio is survived by his wife Maria José Rita, a daughter and a son.