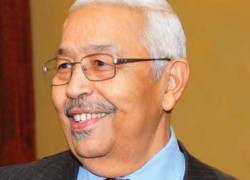 Former Cape Verdean President Pedro Pires has been short listed by Forbes magazine as African Personality of the Year for 2011. Pires, 77, is one of five nominees for the honor. The nominee will be announced on the 30th of November, according to Forbes’ web site.

The Forbes Africa, Person of the Year 2011 award will go to “the individual who, for better or worse, has had the most influence on events of the year gone by,” the magazine says.

Last month, Pedro Pires was awarded the prestigious, $5 million Mo Ibrahim Prize for good governance in Africa, after having serving his country as prime minister for 16 years.

After paying a prominent role in Cape Verde’s struggle for independence from Portugal, Pedro Pires was prime minister from 1975 to 1991 and president from 2001 to 2011. He decided not to run for office after his second term expired early this year.

He was cited by the Mo Ibrahim Prize commitee for turning his small island nation into a model of democracy, stability and prosperity, for his role in transforming Cape Verde from single-party autocracy to multi-party democracy, and for his willingness to step down from power.