Fonseca leads in polls with 54.3 % of ballots– Cape Verde 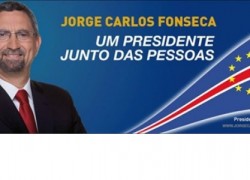 Jorge Carlos Fonseca, 51, supported by the Movement for Democracy (MPD), was leading in polls with 54, 3% of ballots, with 82, 7% of precincts closed, in the Sunday run-off presidential election.

Provisional results are expected by August 24 and the final outcome will be announced by the Supreme Court by August 26.

Jorge Carlos Fonseca faced Manuel Inocencio Sousa, 60, of the ruling African Party of the Independence of Cape Verde (PAICV) in the second round of voting underway to decide the winner.

Fonseca, a former Foreign Minister, won the first round of voting two weeks ago, leading all candidates with 37% of votes. Sousa, who currently is Minister for Infrastructure and Transport, was second with 33%.

Over 305,000 voters were registered to cast their votes for the presidential election, including 36,934 in the diaspora.

The new president elect will replace outgoing President Pedro Pires who is stepping down after two terms.

The Cape Verdean Constitution does not allow a third term for president. Pedro Pires was elected in 2001 and re-elected in 2006.

The elections were monitored by a team of 13 observers from several African countries led by Congolese Pascal Gayama, former Deputy Secretary General of the African Union. In addition to the AU mission, Sunday’s elections in Cape Verde were supervised by 11 observers from the United States and the Economic Community Of West African States (ECOWAS).

Cape Verde (population 508,659), a former Portuguese colony off the northwestern coast of Africa, made up of 10 main islands and eight islets, is often praised for its political and economic stability despite limited natural resources.

According to the US Department of State, an estimated 500,000 people of Cape Verdean ancestry live in the United States.