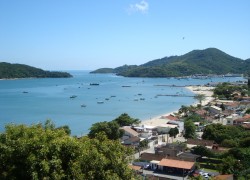 The municipality of Florianópolis, in the state of Santa Catarina, Brazil, is honoring its Azorean heritage with the establishment of the “Centro de Cultura Açoriana” (Azorean Cultural Center) planned for 2012.

The first Portuguese landed in Santa Catarina island in 1514, which they named “Ilha dos Patos” and later renamed Santa Catarina. The Azorean immigration took place between 1747 and 1756 with the arrival of about 6,000 settlers, including some settlers from Madeira.

They left an important cultural inheritance in terms of architecture, culinary, folklore and a very particular accent still alive. They were the founders of several villages “Freguesias” where examples of Azorean architecture style buildings were built.

The Azorean presence in Santa Catarina is still celebrated today with more than 14 Holy Ghost festivals every year.

Today the population of Santa Catarina (980,396) enjoys a high quality of life. Dedicated to the information technology and tourism industries, Santa Catarina state is one of the most prosperous and dynamic regions of Brazil. Santa Catarina, with its 42 pristine beaches, has become an international center of surfing activity.