Florbela: Her cry for love and freedom never to be silenced – Essay 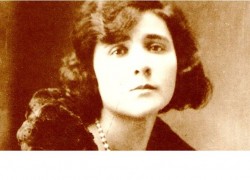 Florbela Espanca (1894-1930) is one of Portugal’s most known and loved poets. I became interested in Florbela’s poetry after hearing her poem “Amar” sung by the Fado singer Cidália in Lisbon in 1979. I was captured by the ineffable quality of the poem and have been translating her poetry ever since. Florbela’s poetry speaks to me because of the absence and longing it expresses, along with her use of striking imagery from nature, religion, and Symbolism.

Her life was filled with torment caused by her gender, her deviation from provincial mores, and her lifelong sense of loss and abandonment. She was the illegitimate child of a housemaid and a nondescript father who didn’t acknowledge her until nearly twenty years after her death. In a Catholic country at the turn of the Twentieth century, she married three times and divorced twice.

She is reputed to have been in love with her only brother, also illegitimate, who killed himself by plunging into the Tagus River in a solo flight. On her 36th birthday, Florbela died, presumably of an illness, but leaving in question the real cause, since she had attempted suicide twice in the immediate months before her death.

She was little understood by contemporary critics, who characterized her style as “feminine” and “narcissistic,” usually conflating the two terms. However, she was well ahead of her time as a voice calling for freedom of gender and mind. She uses liturgical imagery, was influenced by French Symbolism, and frequently describes her beloved Alentejo.

While much of her poetry is characterized by longing and a sense of abject abandonment, it is nearly always beautiful. Her main oeuvre consists of four volumes of sonnets: Livro de Mágoas, Livro de Soror Saudade, Charneca em Flor, and Reliquiae. The following are my translations of a selection of original poems published in 1994, in Rui Guedes, Obras Completas de Florbela Espanca, Dom Quixote: Lisboa.

I want to love, love with abandon!
To love for love’s sake: here, there,
this one, that one, another, and everyone.
To make love, to be in love, and to love no one.

To remember? To Forget? Makes no difference.
To hold on or let go? Neither bad nor good.
But to say you can love one your entire life,
is a lie.

There is one Spring in each life:
You must sing it like Spring, floridly,
For if God gave us voice, it was to sing!

My body trembles seeking yours,
my hands are hot on your skin
smelling of amber, vanilla, and honey,
my crazed arms long to embrace you.

I search for your eyes everywhere,
thirsty for kisses, bitter,
overcome with hunger sharp and cruel,
because nothing satisfies it!

And I see you from afar. I feel your soul
near mine, a calm lake,
telling me that you don’t love me.

And my heart, disregarded,
drifts on the currents,
a black skiff on a sea of flames.

It’s you! It’s you! You’ve come, finally!
I hear again the laughter in your steps!
It’s you I see holding out your arms
created for me to hold you close!

Seeing this, everything is divine and holy.
The blues and weariness are gone,
the world isn’t the world: it’s a garden,
an open sky: infinite space.

Touch me all over, Love, hold me tight!
What do you see around you? There’s no one!
The earth? – a dimming star.

Tell me, love, that I’m loved,
tell me about the brilliance of your favorite dreams,
snuggle me, smiling, next to your chest,
take life’s worries from me.

Drunk with a strange labor,
I bring my undone heart in my hands.
Show me the light, teach me the rules
that will save and ransom me.

I am deep in this black well,
without illusions, without beliefs, without tenderness,
torment without faith of the dying.

I scream your name in a strange thirst
as if it were, love, all the coolness
of the mountains’ crystal waters.

In the dead of night, curved at the foot of the mountain,
the plain is a brazier, and tortured,
the bloodied, rebellious trees
cry out for God to give them a fountain.

And late morning, when the sun embroiders
golden the Spanish broom burning by the road,
their tragic profiles are outlined against the horizon
like scruffy sphinxes.

Trees, hearts, souls that weep,
souls like mine that plead in vain
for relief from so much misery!

Trees . . . Don’t weep! Look here and see:
I too am crying out, dying of thirst,
begging God for my drop of water!

(*)Billie Maciunas graduated from Brown University with a degree in comparative literature and went on to receive a Ph.D. from the University of North Carolina in Chapel Hill, continuing her study of literature in the Portuguese language and writing a master’s thesis on Florbela’s poetry. She has taught  American Literature and is also a poet. She lives in Altamonte Springs, Florida, with her Australian terrier Ruffian.