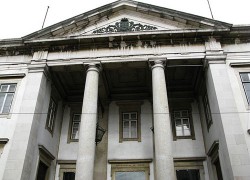 The Luso-American Development Foundation (FLAD) is sponsoring a visit to the University of Massachusetts this week of a delegation representing 27 Portuguese universities.

The objective is to recruit students in the United States, including Americans of Portuguese descent, interested in attending institutions of higher learning in Portugal.

According to Fátima Fonseca, FLAD representative, the potential for growth in the number of American students studying in Portugal for one semester to a year is quite large. The goal is to attract about 3,000 she said.

“There is a number of reasons we can ‘sell’ in the United States the choice of Portugal as a destination for studying,” she told Lusa.

Referring the high standards of the Portuguese universities and research centers as the main reason for the choice she also said that Portugal ” can open doors to other Portuguese-speaking markets like Brazil,” she added.

Recently, FLAD sponsored the creation of a program of study abroad, which will send students from the University of Massachusetts to Lisbon starting this year.