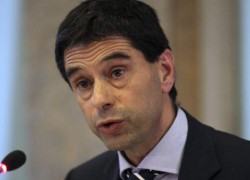 On Tuesday, after addressing the Brooking Institution, Gaspar held a meeting with Christine Lagarde, the head of the  of the International Monetary Fund (FMI). On Wednesday Gaspar will meet Ben Bernanke, chairman of the US Federal Reserve.

In Washington on Monday, Gaspar  told journalists the US Government is open to help Portugal to return to the bond market.  “The position of the United States is of great understanding of the adjustment effort required of Portugal, ” he said after a meeting with the new US Secretary of the Treasury.

The main purpose of the visit was to meet with US Government representatives, with members of the financial community and international investors, to inform about the evolution of Portugal’s fiscal adjustment program and as part of the ongoing process to returning Portugal to the bond market.

According to Gaspar, Portugal is on the right track and its policies of austerity will continue to be enforced until they start paying off in 2014, when Gaspar has predicted the economy will grow 0.6 percent.

Recently, Portugal’s bailout lenders — the International Monetary Fund, the European Central Bank and the European Commission — have agreed to ease the country’s debt-reduction targets amid deteriorating economic prospects, forecast to shrink 2.3 percent in 2013.

On its third straight year of recession, Portugal’s unemployment rate is currently at a record 17.2 percent, forecast to climb to 18.5 percent in 2014. Last year the Portuguese economy contradicted 3.2 percent.

In May 2011, Portugal was forced to negotiate a €78 billion ($104 billion) bailout with the International Monetary Fund (IMF), the European Central Bank and its EU partners,aimed to reducing the national deficit.