Film: “The Gilded Cage” debuts at the Museum of Modern Art – NY, NY 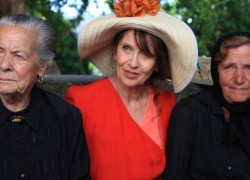 The Arte Institute is presenting the screening of the French-Portuguese production “The Gilded Cage,” at Museum of Modern Art (MoMA) in New York City, on April 12, at 4pm.

With director Ruben Alves and actors Joaquim de Almeida and Rita Blanco attending, the event is sold out.

Based on the lives of a Portuguese immigrant family in France, the film tells the story a working-class Portuguese couple in Paris with dreams to returning to Portugal. An unexpected inheritance would have made it possible for the Ribeiros to resettle in their homeland, but the family is caught into the immigrant dilemma of having to choose between their homeland and their adoptive country.

The Gilded Cage, was first screened in North America at the 17th Cinéfranco Francophone International Film Festival taking place from March 28 to April 6, in Toronto, Canada.

Established in 2011, the Arte Institute is a New York City based non-profit organization with the mission of promoting Portuguese art and culture and offering a creative environment for Portuguese artists in the areas of visual arts, literature, music, dance and film.