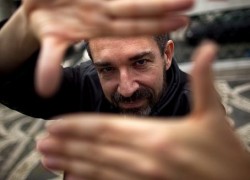 The Center for Portuguese Studies and Culture and the Portuguese and Lusophone Film Series at UMass Dartmouth announce the screening of Trip to Portugal (2011), directed by Sérgio Trèfaut. The event—free and open to the public—will take place on Tuesday, July 17, 2012 at 5:30 p.m. in the Main Auditorium, parking lot 4.

Trip to Portugal (original title: Viagem a Portugal) is a politically engaged film about European procedures at airport border control and the inhuman treatment that has become acceptable nowadays. Of all the passengers on her plane, Maria is the only one to be detained and interrogated by Immigration Police.

The situation turns into a nightmare when the police officers realize that the man waiting for Maria at the airport is Senegalese. Illegal immigration? Human trafficking? Anything is possible.

Sérgio Trèfaut was born in Brazil in 1965, from a Portuguese father and a French mother. After receiving a Master’s degree in Philosophy at the Sorbonne (Paris), he started his career in Lisbon as a journalist and assistant director. Eventually he became a producer and a director.

Summer Program Director Christopher Larkosh had this to say on the upcoming visit: “This is the second year that the Center for Portuguese Studies and Culture and Summer Program in Portuguese has worked together with the Instituto Camões and the Portuguese Consulate to bring Portuguese films and directors to the South Coast region. We’re honored to welcome such a prominent figure in Portuguese cinema as Sérgio Trèfaut.”

The screening will be presented by the director and followed by a round table on the film and the director’s other works. The Portuguese and Lusophone Film Series is organized by Fernando Beleza, Ph.D. candidate at UMass Dartmouth and instructor in the 19th Annual Summer Program in Portuguese at UMass Dartmouth. The series is sponsored by the Consulate of Portugal in New Bedford and the Instituto Camões in Lisbon.