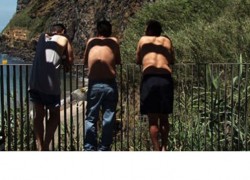 The Ferreira-Mendes Portuguese-American Archives and the Department of Sociology and Anthropology at UMD are presenting a public screening of the film Deportado (2012) 67’ by Nathalie Mansoux.

Filmed in New Bedford, Fall River and the Azores, this documentary examines the forced repatriation of legal, Azorean immigrants from the US to their places of origin and the resulting tragic consequences of this policy for the deportees and their families. Having, for the most part, left the islands at a young age, and been raised in the US, the majority remember little of the Azores upon their return and face considerable barriers to re-integration into Azorean society. Separated from loved ones and barely speaking Portuguese, their struggle leaves them feeling disconsolate, ostracized and discouraged. Lost in faraway memories of the U.S., the deportees come to abide in an open-sky prison of abandoned hopes.

The screening will take place at the Archives’ Prince Henry Society Reading Room on Thursday, October 23, at 9:30am and will include a discussion on social justice and the human and legal right of immigrants with the director of the film, Nathalie Mansoux, and anthropologist Miguel Moniz (Senior Researcher, Center for Research in Anthropology, ISCTE/IUL) who has investigated and written about deportation and served as Academic Consultant and a translator of the film.

The screening of Deportado was made possible with the support and collaboration of various organizations, including Casa dos Açores da Nova Inglaterra, Immigrants Assistance Center, Inc. of New Bedford, SATA/Azores Express, Direção Regional das Comunidades of the Government of the Azores, and the Center for Research in Anthropology (CRIA) at the Instituto Universitário de Lisboa (ISCTE/IUL).