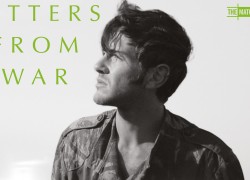 The film Letters from War, by Portuguese director Ivo Ferreira (2016), will be presented Sunday, May 7, at 2:15pm, as part of the 2017 edition of Panorama Europe Film Festival. The screening will take place in the Bartos Screening Room, at the Museum of the Moving Image, in Queens, NYC.

Featured in 2016 Berlin Film Festival, the film is inspired by the letters written in the 1970s by renowned Portuguese novelist António Lobo Antunes to his wife, while the author was stationed in Angola during the Portuguese Colonial War. The letters recount his experiences working as a doctor in a military hospital, his growing disillusionment with the conflict, and, above all, his yearning for his wife and child.

Presented by the Consulate General of Portugal in NYC, the screening (105 mins) is in black and white and in Portuguese with English subtitles, performing Miguel Nunes, Margarida Vila-Nova, and Ricardo Pereira.

The 2017 edition of  the Panorama Europe Festival, which runs through May 5-21, features seventeen vibrant works—including witty comedies, gritty thrillers, and timely documentaries—representing some of the finest and most riveting films coming out of Europe today.

The Festival will be filled with New York premieres, with opening and closing night events featuring special guests in person. This is a great opportunity to discover some of the most exciting new international filmmakers. Screenings will take place at Museum of the Moving Image in Queens and at the Bohemian National Hall in Manhattan.

In its ninth edition, this is a great opportunity to discover some of the most exciting new international filmmakers. Screenings will take place at Museum of the Moving Image in Queens and at the Bohemian National Hall in Manhattan.

This year,  Europeans celebrate an important milestone—the 60th Anniversary of the Treaties of Rome —signed on March 25, 1957, in order to establish a common market allowing people, goods, services, and capital to move freely. From the ravages of WWII, these treaties brought peace, prosperity, and security to millions of people in Europe. Panorama Europe Film Festival is part of this important celebration, the EU60 campaign, in New York City.

Programmed by David Schwartz, the Museum’s Chief Curator, and Eric Hynes, Associate Curator of Film, in collaboration with partner institutions, the festival offers New York audiences what may be their only chance to see these acclaimed films on the big screen.

“The films this year feel edgier and more vibrant than previous editions, perhaps reflecting the anxieties and rapidly changing realities in present-day Europe. While most European countries are steeped in history and tradition, the feeling one gets from the films featured here is that national and personal identity are up for grabs,” said Chief Curator David Schwartz. “The Museum is very pleased to present this showcase, which is filled with New York premieres of films by major emerging directors.”

ABOUT THE PRESENTING ORGANIZATIONS:

European Union National Institutes for Culture (EUNIC)
EUNIC is part of a global coalition of national cultural institutes and cultural diplomatic services from the European Union that works in more than 80 cities on all continents. EUNIC New York was founded in 2007 and has 14 full members and 32 associate members and observers. The mission of the EUNIC New York is to promote and present the best of European creative and intellectual achievements to New York and U.S. audiences. EUNIC works to create artistic and educational opportunities, strengthen cultural relations, and create effective collaboration between members and cultural institutions. EUNIC partners with eminent American and European organizations to provide programs in the fields of art and culture, language and education, society and academia. EUNIC main objectives are to provide a forum for discussion on issues of common interest, including EU cultural policies and strategies, facilitate sharing of best practices and expertise among its members, act as interlocutor for the local public and private institutions on European cultural issues of common interest, to be an active partner to EU Representation / EU Delegation in the host country and act as facilitators to bid for EU funded projects. More information at http://new-york.eunic-online.eu

Museum of the Moving Image (MoMI)
The Museum of the Moving Image advances the understanding, enjoyment, and appreciation of the art, history, technique, and technology of film, television, and digital media. In its stunning facilities—acclaimed for both its accessibility and bold design—the Museum presents exhibitions; screenings of significant works; discussion programs featuring actors, directors, craftspeople, and business leaders; and education programs which serve more than 50,000 students each year. The Museum also houses a significant collection of moving-image artifacts. More information at www.movingimage.us

Czech Center New York at The Bohemian National Hall (BNH)
The Bohemian National Hall, a recently redesigned, award-winning landmark building on the Upper East Side of Manhattan, is a center for Czech culture in New York City. Since it was established in 1896, it has served as a focal point for its community as well as a place for exchange and dialogue with the American audience. More information at www.czechcenter.com