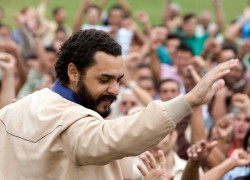 The film directed by Oscar nominee Fábio Barreto (Quatrilho) and produced by his sister Paula Barreto for L.C. Barreto was chosen as Brazil’s entry to the 2011 Academy Awards.

Based on the book by Denise Paraná, “Lula, Son of Brazil,” is a moving story of the early years of Brazil’s most beloved president. It took Lula da Silva four attempts at becoming Brazil’s president before he was finally elected in 2002 and then re-elected for a second term in 2006. He became the first left-wing candidate to hold the country’s highest office in nearly half a century. The economy of Brazil has grown quickly since President Lula first took office in 2003.

Born into extreme poverty in 1945, Lula da Silva was guided by a strong mother (Lindu) who faced overwhelming obstacles to raise her children with the drive and courage to live life without fear. Lindu, who was abandoned by her husband, just before Lula’s birth, never wavered from her strict commitment to seeing that her kids live a better life. She raised eight children on her own, and with an unbridled tenacity, she saw to it that each child lived life to the fullest.

The film also pays tribute to Lula’s mother, who is portrayed with warmth and dignity by one of Brazil’s leading actresses, Gloria Pires. Her devotion to her son helps him to survive many personal setbacks.

Lula spent the better part of his childhood growing up just outside of Santos, Brazil. When he wasn’t in school, he helped support the family. He hustled – shining shoes, selling fruit, working as a delivery boy. He studied at SENAI, a technical school from which he graduated in 1963. As a full-fledged member of the union, Lula found his path to a life in politics.

However it wasn’t until he experienced an intense personal transformation following the startling death of his first wife and unborn son, that Lula found the courage and ambition he needed to take full control of his destiny.