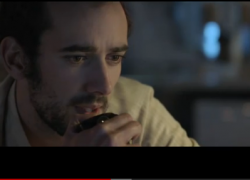 Short film “North Atlantic” by Portuguese director, Bernardo Nascimento, was selected as one of the 10 finalists chosen by the YouTube “Your Film Festival” to be in Italy at the 2012 Venice Film Festival.

The grand prize winner of Your Film Festival competition will be named by a special jury and awarded a $500,000 YouTube original production grant. The winner will be announced at the Venice Film Festival.

Throughout June-July, a list of 50 semi-finalist shortlisted films was featured on YouTube and the public voted for their favorites. The list was selected from more than 15,000 short films submitted by directors worldwide.

Audiences from around were invited to cast their votes, selecting the 10 finalists. “North Atlantic” is a 15 minute drama involving an isolated air traffic controller in the Azores connected with a lone pilot helplessly adrift over the North Atlantic.

The feature has already caught international attention after being premiered at the London Film Festival and presented at more than 40 international competitions, having won nine prizes and honors in Portugal, Italy, USA, Japan and Poland.

Bernardo Nascimento, who is based in London, was born in Portugal in 1975.  He studied Music and History in Lisbon and Paris before starting working in film as an assistant director with Portuguese director Manoel de Oliveira. In 2005 he moved to London, where he has worked in “auteur” films projects, namelywith  Mathew Vaughn ( Kick Ass).  “North Atlantic” is Bernardo’s debut as director.

The “Your Film Festival” competition is a global search to find the world’s best storytellers. The initiative was launched June 11, by YouTube and Emirates, in partnership with La Biennale di Venezia (the Venice Film Festival) and Scott Free. The finalists were selected by Scott Free Productions, Ridley and Tony Scott’s production company.

Founded in 1932 and organized by La Biennale di Venezia, the Venice International Film Festival is the oldest film festival in the world. The festival is one of the most prestigious events for professionals and devotees of film and culture. It was created to advance the knowledge and diffusion of international cinema in all its forms: art, entertainment and industry, in a spirit of freedom and tolerance. La Biennale di Venezia presents the international competition award, the Golden Lion, among other prizes.