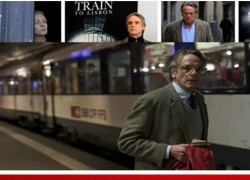 The movie adaption of bestselling novel, Night Train to Lisbon, by Pascal Mercier, will have its world premiere, February 7-17, at the 2013 Berlin International Film Festival.

The top prize will be awarded by a seven-member jury under Chinese director Wong Kar-wai, presiding over 19 film submissions. Last year’s Golden Bear went to Caesar Must Die, by Italy’s Paolo and Vittorio Taviani.

Night Train to Lisbon tells the story of Raimund Gregorius (Jeremy Irons), a Latin teacher at a Swiss college who falls in love with a mysterious Portuguese woman in Bern, Switzerland. Love stricken, he takes a night train to Lisbon, carrying with him a book by Amadeu de Prado, a (fictional) Portuguese doctor and author, who lived during Portugal’s Carnation Revolution, and whose writings explore loneliness, mortality, death, friendship, love, and loyalty.  The novel, published in German, in 2004, became an international bestseller in more than 30 countries.

In Portugal, the film was shot in Lisbon, in a co-production with Cinemate Portugal, assisted by Ana Costa and Paulo Trancoso, in partnership with Portugal’s Institute of Cinema and Audiovisual (ICA). Other co-producers include, Studio Hamburg FilmProduktion and C-Films AG in co-production with C-Films (Deutschland), Cinemate SA and TMG – Tele München Group.

Night Train to Lisbon will debut in Portugal March 21. No date has been set for a debut in the United States.