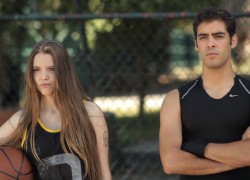 The ABCs of Death2 contest is once again looking for their 26th director and Portuguese short filmmaker José Pedro Lopes is one of the contenders.

This year the letter in question is ‘M’ and Lopes has submitted M is for Macho a short feature telling the story of two friends who challenge each other to play basketball with zombies.

Written and directed by José Pedro Lopes, M is for Macho was sponsored by Anexo 82, produced by Ana Almeida and Pedro Santasmarinas, cinematography by Francisco Lobo, sound design and soundtrack by Emanuel Grácio, starring Mafalda Banquart and Agostinho Santos.

The ABCs of Death 2 is a feature film made of 25 short movies by cult horror guest directors from all over the world. The competition is an international search for the 26th short film director to be a part of the collective production.

Submissions close on October 31, midnight Halloween day, with voting ending on November 30. The winner will be announced on December 15.

Voting will be tabulated from social media, as well as by a jury including ABCs of Death 2’s directors, producers and their associates.