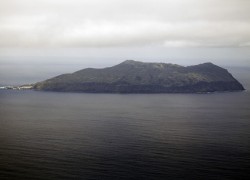 The Anthology of Film Archives is presenting “It’s Earth Not the Moon” [É a Terra Não a Lua] by Portuguese director Gonçalo Tocha. The screenings is scheduled for 7:30pm, Friday, July 13, at the Anthology Film Archives, 32 Second Avenue, NYC.

Released in 2012, the feature was the winner of the Golden Gate Award, for Best Documentary Feature, at the 55th San Francisco International Film Festival (SFIFF) held last May.

Mike Hale, a film reviewer for The New York Times, has stated, “It is easy to see the visual enchantment of Corvo, and “It’s the Earth” shows the island’s absurdly dramatic landscape from every vantage point: atop its cliffs, across its small and verdant pastures, inside the gently eerie caldera of an extinct volcano.”.

The 185 minute award-winning is a documantary filmed on Corvo , the smallest of the nine island of the Azores. The documentary has won several international film awards, namely a Special Mention at the 2011 Locarno Film Festival; the Best Feature Film Award at the 2011 DOCLisboa International Film Competition.

Founded in 1969, Anthology Film Archives is an international center for the preservation, study, and exhibition of film and video, with a particular focus on independent, experimental, and avant-garde cinema. Anthology screens more than 900 programs annually, preserves an average of 25 films per year (with 800 works preserved to date), publishes books and DVDs, and hosts numerous scholars and researchers.  Read more >>