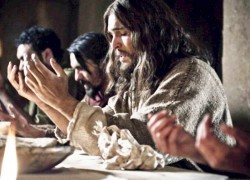 Portuguese TV star, Diogo Morgado, plays the leading man, as Jesus Christ, in the miniseries epic production The Bible for the History Channel.

The production, by Mark Burnett and Roma Downey, drew over 15 million viewers, last Sunday, making it the History Channel’s best day ever.

The 10-hour miniseries will be featured every Sunday, over the next several weeks, at 8 p.m., EST, culminating on Easter Sunday.  Jesus Christ (Diogo Morgado) won’t be front and center until the third week.

For co-producer and veteran actress, Roma Downey, who plays the role of Mary, “We looked long and we looked hard for our leading man,” she said and added, “We wanted somebody who was charismatic, dynamic, and could portray strength and vulnerability at the same time. We had a few actors in mind, but we still didn’t feel like we had found the perfect character. Then we saw a tape of a Portuguese actor named Diogo Morgado, and we arranged very quickly to meet with him. He came for a meeting at our home [in Malibu, Calif.] and we were so eager to set eyes on this actor. Mark and I were peeping out the glass window as he walked up the garden path, and we just knew. I turned to my husband and said, ‘There he is! There’s our Jesus. We found him. We found Jesus!’”

Diogo Morgado, 33, is a Portuguese screen and theater actor, who has been working since the age of 15. Raised a Catholic, Morgado got his break in 1998 when he became a series regular on Terra Mãe , a popular Portuguese soap opera.

In 2013, in addition to The Bible , Morgado will work in the United States in two other projects: independent films Red Butterfly and Born to Race: Fast Track.

“Jesus is definitely the most complete and complex figure of mankind; he’s just someone who belongs to millions and billions of families all around the world,” Morgado told Entertainment Tonight. “Just [given] the chance [to play him], I’m like, ‘Okay, I’m going to try to just give an example of my Jesus,” he said.