Film: Diogo Morgado back on screen in the role of Jesus Christ – 20th Century Fox 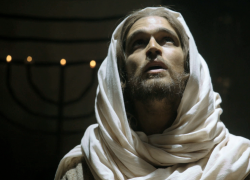 Portuguese actor Diogo Morgado plays the title role in “Son Of God” a big screen motion picture to be released nationwide on February 28, 2014.

The film is a production of 20th Century Fox, together with Mark Burnett and Roma Downey, producers of the The Bible, the History Channel 10-hour mini-series, aired on cable TV early in the year, with Diogo Morgado playing the role of Jesus.

The mini-series was a ratings phenomenon, averaging 15 million viewers per episode, earning three Emmy nominations with Diogo Morgado being a nominee in the category of “Best Actor” in a miniseries or film.

“The producers are thrilled that their Jesus narrative will finally be seen on the big screen.” We are very excited to be working with Twentieth Century Fox to release Son of God as a major motion picture,” said Roma Downey and Mark Burnett in a 20th Century Fox press statement.

“We responded to an overwhelming demand for the greatest story ever told to be seen as a shared experience on the big screen. The result is a beautiful stand-alone movie. It’s the story of Jesus for a whole new generation,” they stated.

Following the success of The Bible, NBC has also announced that a new 12-hour miniseries sequel, titled A.D. will debut on the network  TV in the Spring of 201. Produced by LightWorkers Media with Burnett, Downey and Richard Bedser as executive producers, it is unclear if Diogo Morgado will reprise his role of Jesus for the NBC production.

“The cast and director of the new miniseries will be announced at a later date,” NBC said, adding that British screenwriter Simon Block will write the scripts.

The NBC mini-series is said to portray life after Jesus. “You might think the story is over at the Crucifixion, but as most of the world knows, that was only the beginning,” said Jennifer Salke, President of NBC Entertainment. “Everyone’s lives were completely altered in an instant and the immediate aftermath of Christ’s death had an impact on his disciples, his mother Mary, and key political and religious leaders of the time,” he said.

Born in Lisbon, Diogo Morgado, 34, was a Portuguese model and soap opera star. At age 14, Morgado participated in a youth magazine talent contest and was invited back for an audition. He landed a part on a Portuguese television show at age 15. At 21, he went to a drama school in Madrid, Spain. He has worked in television, cinema and theater ever since. In 2011, he led a role in Laços de Sangue, which won the year’s International Emmy for Best Soap Opera. Morgado’s cinema credits include the international film productions Dos Rivales Quasi Iguales (Spain) and Revelação (Brazil). In 2013, in addition to The Bible, and Son of God, Morgado has been working in the United States in two independent films Red Butterfly and Born to Race: Fast Track.