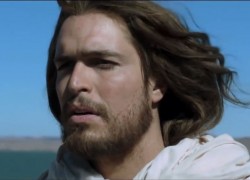 Portuguese born Diogo Morgado is the latest actor performing the role of Jesus in the new film “Son of God” produced by 20th Century Fox to be released in theaters nationwide February 28.

The ambitious motion picture tells the life of Jesus expanding on the 10-hour mini-series, The Bible, produced last year by Mark Burnett and Roma Downey for the History Channel.

The mini-series, aired in March of 2013, was a ratings phenomenon averaging 15 million viewers per episode, earning three Emmy nominations with Diogo Morgado being a nominee in the category of “Best Actor” in a miniseries or film.  Morgado, who became an overnight sensation, has been cast in the same role in Son of God.

While the original mini-series dealt with stories from the Bible, Son of God will tell the story of Jesus Christ, from his birth through his crucifixion and resurrection to include included many of the scenes cut off the original mini-series production. According to producers, there was some additional writing and a number of extra scenes being re-edited from the mini-series to add more footage and new perspectives.

Morgado, who identifies as a believing Christian, has said, “The whole thing comes across as more human,” adding, “I’m not a fan of that word, but it is true. Accessible, that’s definitely the word. He [Jesus] was, 100 percent, the son of God, but he was 100 percent in a human condition.”

This will be the first feature film to depict the life of Jesus’ life since The Greatest Story Ever Told releases in 1965. In 1973, there was a film version of the musical Jesus Christ Superstar, followed by Martin Scorsese’s 1988 film The Last Temptation of Christ and Mel Gibson’s 2004 film The Passion of the Christ.

Diogo Morgado, 35, was born in Lisbon, Portugal where he worked as a model and started his film career.  At age 14, Morgado participated in a youth magazine talent contest and was invited back for an audition. He landed a part on a Portuguese television show at age 15. At 21 he went to a drama school in Madrid, Spain. He has worked in television, cinema and theater ever since. In 2011, he led a role in Laços de Sangue, which won the year’s International Emmy for Best Soap Opera. Morgado’s cinema credits include the international film productionsDos Rivales Quasi Iguales (Spain) and Revelação (Brazil). In 2013, in addition to The Bible, and Son of God, Morgado has been working in the United States in two independent films.