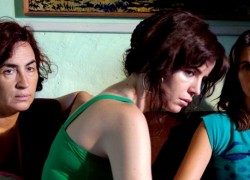 The distinction includes a cash award of $5,000 by the Miami-based John S. and James L. Knight Foundation.

Bonsái, the Chilean drama based on the novel by Alejandro Zambra about an author who taps into his past to inspire his new novel, won the highest cash award of $30,000 by the Knight Foundation Ibero-American Competition prize. The film also won the $5,000 Jordan Alexander Ressler Screenwriting Award prize.

Blood of My Blood depicts the struggles of a working-class family living in close quarters in one of Lisbon’s suburban slum-like neighborhoods. Two sisters, Márcia and Yvette, and her two adult children, Claudia and João Carlos, fight to keep their family together in the face of the hardships of living in a Lisbon apartment, bereft of any privacy. But despite their efforts, the situation deteriorates fast. The film delivers a message of hope and unconditional love.