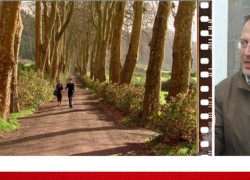 The film, entirely shot on São Miguel island, is based on a short story by Azorean writer Ruy Guilherme Morais.  Set in the 20th century, the movie explores the theme of poverty and emigration as experienced by many Azoreans.

Starring Eduardo Almeida and Fátima Sousa, the production was assisted by co-directors Judite Barros, Fátima Cabral and A. Valente. The music was by Emanuel Paquete and Fernando Augusto Rocha, image by Paulo Medeiros, and sound by Paulo Medeiros and Carlos Silva.

Co-produced by Cineact, Filmógrafo and Cine-Clube de Avanca, the feature was awarded Best People’s Choice at the 2012 Panazorean Film Festival and Best Short Film at the 2012 Ribeira Grande Film Festival.

The Script International Short Film Festival aims to recognize outstanding short films based on social issues and themes. More than 400 films were screened this year by a jury headed by Revathy, Indian noted actress and director.