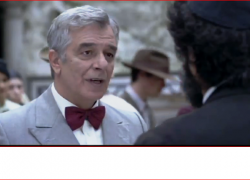 The film “O Consul de Bordéus,” has premiered in Lisbon, Portugal, portraying the “enormous courage and personal commitment” of the diplomat Aristides de Sousa Mendes, who saved tens of thousands of lives of refugees from World War II.

“It makes every sense to make this film because of its subject matter,” told Portuguese director Francisco Manso in an interview for Lusa. “It’s a dramatic story … of a universal nature, but revealing an attitude of enormous courage,” he said.

The film blends the story from the perspective of a fictional orchestral conductor, recalling his time as one of thousands of refugees from the Nazi regime, with the true story of Sousa Mendes.

As Portugal’s consul in the French city of Bordeaux, Sousa Mendes issued some 30,000 visa to refugees fleeing the Nazis, in direct disobedience to orders from Oliveira Salazar, the Portuguese wartime dictator. The action focuses on the peak period of June of 1940.

The film was shot mainly in Viana do Castelo, in northern Portugal, at a cost of Euro3 million, part-funded by Spanish, Belgian and Polish institutions.

The film has already been screened for the New York Jewish community and in Tel Aviv, Israel, as well as in opening festivals in India and in Muscat.

“If we have a modern hero it is Aristides de Sousa Mendes, a fascinating personality who has been forgotten for political reasons and through laxness,” Manso told Lusa earlier this year.

The director is currently trying to raise funds to dub the film into English, to assure it a global release.