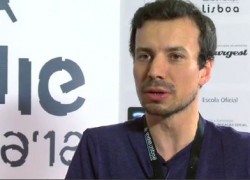 The film, From New York with Love, by Portuguese filmmaker André Valentim Almeida, will be screened June 18, at the Northside Film Festival, the largest annual talent discovery festival taking place June13-10, in Brooklyn, New York. The screening is scheduled for 6:30pm, in the UnionDocs, 322 Union Brooklyin, NY.

Through a tourist camera, the 70 minutes feature documents the experiences of a newcomer wondering the streets of York City, capturing first impressions and the evolving relation of a foreigner’s with the host city.

Launched in 2009, the Northside Festival is organized by Daniel and Scott Stedman, founders of the Northside Media Group. The event features hundreds of bands, panelists, entrepreneurs and filmmakers, attracting over 80,000 fans.

“I’m honored to be part of Northside Film Festival. It’s one of the most exciting festivals in Brooklyn and I made it through with a feature film made with a point and shoot camera edited on my laptop. I’m also glad to screen in a place that means so much to me – the UnionDocs – and that I’ll be able to share a bit of Portugal with the audience,” Almeida told the Portuguese American Journal.

André  Valentim Almeida is a Portuguese linear/interactive filmmaker and documentary editor. He is a professor and Ph.D candidate currently finishing his dissertation on Interactive Documentary. He has taught media production at the University of Porto, Portugal, and was the scientific coordinator of a major video training program at the newsroom of the Portuguese news agency. Almeida was part of the first yearlong collaborative documentary program at the UnionDocs (Brooklyn, NY), where he was the Collaborative Studio Director.

As a media maker, his work has been screened at MoMA, IndieLisboa, Carpenter Center for Visual Arts, TEDx Brooklyn among others. He directed/edited three feature documentaries, The Quest of the Schooner Creoula, From New York with Love and Uma na Bravo Outra na Ditadura.  Currently, Almeida is pre-producing two interactive documentaries.  Recently, he was featured as a TED speaker at TEDx Aveiro (Portugal).