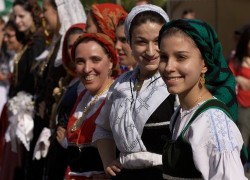 The film Alto Minho (2012), by Portuguese director Miguel Felgueiras will premiere at the 2013 Margaret Mead Film Festival to be held in New York City, on October 20, at 5:30 pm, in the American Museum of Natural History, with director in attendance.

The annual Margaret Mead Film Festival is dedicated to anthropologic and ethnographic themed productions. This year, the jury will select the winning awards from 39 features submitted by 10 countries.

The Margaret Mead Filmmaker Award “recognizes documentary filmmakers who embody the spirit, energy, and innovation demonstrated by anthropologist Margaret Mead in her research, fieldwork, films, and writings.”  Each year, the award is given to a filmmaker whose feature documentary offers a new perspective on a culture or community remote from the majority of our audiences.

The Margaret Mead Film Festival, the longest-running, premiere showcase for international documentaries in the United States, has introduced New York audiences to Oscar-winning documentary The Blood of Yingzhou District (2006), Oscar-winning animated short The Moon and the Son: An Imagined Conversation (2005), The Future of Food (2004), Power Trip (2003), and Spellbound (2002).