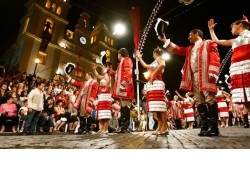 The Sanjoaninas Festival, honoring Saint John, is underway in Angra do Heroísmo, Terceira, Azores, June 21 through June 29, attracting thousands of visitors to the island. This is year, the theme of the festival is “ The Sea of Emotions”

The celebration is named after São João (St. John) the patron saint of Terceira. The event, the biggest popular festivities in the Azores, dates back to the 16th century and showcases Terceira’s heritage, culture and way of life.

This annual event marks the highest tourism season for Terceira, when many tourists journey to the island for the festas and emigrants return home to celebrate with relatives and friends.

The ritual evolved over the years to become a combination of religious celebrations and secular traditions, which take several days of religious, cultural, recreational, ethnographic and sports activities, attracting many thousands.

The feast features jubilant marches and parades portraying the culture and ethnic pride of the people on the island. One highlight is the choreographed “danças” with groups of performers presenting street dancing routines. This year, 15 dancing groups will participle. Another highlight is the many performances presented for the public in the thirty theatres on the island.

This year Portuguese-American novelist, Darrel Kastin, from Los Angeles, California, will be the guest speaker at cultural event taking place, June 24, in Angra do Heroísmo. Kastin in the author of the recently published The Conjurer and Other Azorean Tales inspired by his Azorean heritage. With roots on Terceira island, Kastin is the  grandson of Francisco and Josefina do Canto e Castro from an ancestral line Azorean family. He will be introduced by local literary critic, Vamberto Freitas.

According to tradition, the celebration opens with the “Queen” parade and includes Portuguese style arena bullfighting and typical Terceira “touradas à corda” [rope bullfights] a local custom similar to the Spanish running of the bulls.

The entire population of the island participates actively in the Sanjoaninas festivities. Terceira is the second most populated (55,000) and third largest Azorean island. In 1983, Angra do Heroísmo, the main town on the island,  became a UNESCO World Heritage Site for its well preserved 16th century Portuguese colonial architecture and historic monuments.